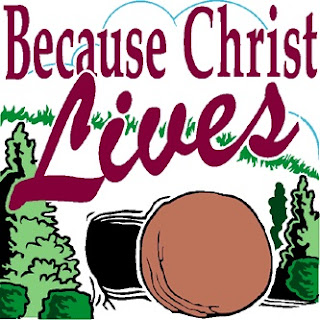 THE TEXT we read for our celebration of Easter comes to us from the Gospel According to Saint John. This account, written in the latter days of the first century, brings to us the startling announcement that caused initial confusion for the disciples… and the good news through the Holy Spirit which brought clarity to the unfolding drama…

Now on the first day of the week Mary Magdalene came to the tomb early, while it was still dark, and saw that the stone had been taken away from the tomb. So she ran, and went to Simon Peter and the other disciple, the one whom Jesus loved, and said to them, “They have taken the Lord out of the tomb, and we do not know where they have laid him.”
Peter then came out with the other disciple, and they went toward the tomb. They both ran, but the other disciple outran Peter and reached the tomb first; and stooping to look in, he saw the linen cloths lying there, but he did not go in.
Then Simon Peter came, following him, and went into the tomb; he saw the linen cloths lying, and the napkin, which had been on his head, not lying with the linen cloths but rolled up in a place by itself. Then the other disciple, who reached the tomb first, also went in, and he saw and believed; for as yet they did not know the scripture, that he must rise from the dead.
Then the disciples went back to their homes. But Mary stood weeping outside the tomb, and as she wept she stooped to look into the tomb; and she saw two angels in white, sitting where the body of Jesus had lain, one at the head and one at the feet. They said to her, “Woman, why are you weeping?”
She said to them, “Because they have taken away my Lord, and I do not know where they have laid him.” Saying this, she turned round and saw Jesus standing, but she did not know that it was Jesus.
Jesus said to her, “Woman, why are you weeping? Whom do you seek?”
Supposing him to be the gardener, she said to him, “Sir, if you have carried him away, tell me where you have laid him, and I will take him away.”
Jesus said to her, “Mary.”
She turned and said to him in Hebrew, “Rab-boni!” (which means Teacher).
Jesus said to her, “Do not hold me, for I have not yet ascended to the Father; but go to my brethren and say to them, I am ascending to my Father and your Father, to my God and your God.”
Mary Magdalene went and said to the disciples, “I have seen the Lord”; and she told them that he had said these things to her. (John 20:1-18)

Chaos Reigns?
The scene at the Lord’s tomb immersed everyone in confusion. Guards and authorities trembled. Though Jesus had repeatedly told the disciples what was to occur, the women who discovered the empty tomb were startled and afraid. The men who they initially told, came with them to see… and left the scene perplexed. They quickly retreated into hiding to talk about the happening.
Subsequently, it seems that none of Jesus’ followers could get things done in orderly fashion. First came denial. Some may have thought, "Who could believe these wives tales”?"
The world was turned inside out and upside down. The women, those who were thought of in that society as property... were first to know... and not the men. In John’s telling we see that the men themselves even reversed proper order, as the unknown and unnamed disciple went into the tomb first, and the supposed leader followed. Indeed, chaos seemed to take hold. No one had previously done such as thing as coming back from the dead. The very thought caused tumult…but the evidence was there... the tomb was indeed empty.
Our gospel writer, caught by the power of the Holy Spirit, thus revealed the Truth in near breathless fashion. The discovery was certain that the tomb was empty. Things like that did not happen… should not happen… but it did. Jesus, just as he had told the disciples… had been raised from the dead.
After the men had left, tears fell from Mary’s eyes. They ran down her cheeks when the impact sunk into her mind. The body of their beloved rabbi was gone. She went into the tomb to learn more. Suddenly messengers were present. They told her that he had risen. And what is more, the tears and blurry eyes of grief that would not allow her to visually recognize Jesus…. suddenly cleared as he spoke. It was he who was, and yet is God’s Word from the beginning… who spoke to her. She heard and knew. That is the power of the Word.

Clarity Rules!
In that moment of recognition shared here by John and other Christian believers since the very first Easter morning, Mary realized the Truth that stood before her. Jesus, the Way the Truth and the Life… stood alive and spoke to her. In that precious moment, in the singular breath that remains as the centerpiece of all human history… he told her to go and tell the others. So she quickly ran to tell those who had retreated… those who could only mutter and wonder. She went and did so… telling them of what she had seen… and the world has not been the same since.
“I have seen the Lord”, Mary said to the others who were gathered. She boldly told those men who were afraid and hiding. Afterward, they and many others would see him as well.
Thus we note from biblical history that eventually the report spread as the disciples wrote of it. We who now hear the gospel can marvel with them at the message. The Holy Spirit provides the power of faith upon those who will hear. That which was impossible is now possible. He who was finite is Infinite. The one who died innocently upon a cross is alive. Jesus, the Christ… the Redeemer who was lifted up on high, died so that we might be forgiven and justified before God. Certainly, Jesus is alive forevermore. He has instructed his church to go and tell others that he has Risen. That is what Mary heard. That is what the disciples heard. That is what we now have also heard, and we are to do the same. We are to go and tell others… He has Risen… Risen indeed.

Help Us Proclaim the Good News!