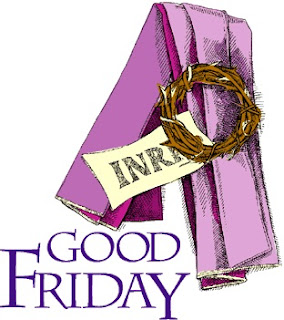 FOR OUR observation and study for Good Friday, we are reminded that in giving himself up unto death, our Lord delivered many who merely stood by watching. He also, by the power of the Holy Spirit… delivered eternal life to those who later read and believed the legacy of his Word. These last surely included pillars of the early Church and also those who would come after them... all who lived in faith believing that everyone who lives in sin killed an innocent. Therefore, we are gathered in repentance with all... we read from the gospel record…

So they took Jesus, and he went out, bearing his own cross, to the place called the place of a skull, which is called in Hebrew “Golgotha”. There they crucified him, and with him two others, one on either side… and Jesus between them.
Pilate also wrote a title and put it on the cross; it read, “Jesus of Nazareth, the King of the Jews.” Many of the Jews read this title, for the place where Jesus was crucified was near the city; and it was written in Hebrew, in Latin, and in Greek.
The chief priests of the Jews then said to Pilate, “Do not write, ‘The King of the Jews,’ but, ‘This man said, I am King of the Jews.’” Pilate answered, “What I have written I have written.”
When the soldiers had crucified Jesus they took his garments and made four parts, one for each soldier; also his tunic. But the tunic was without seam, woven from top to bottom; so they said to one another, “Let us not tear it, but cast lots for it to see whose it shall be.” This was to fulfil the scripture, “They parted my garments among them, and for my clothing they cast lots.” So the soldiers did this.
But standing by the cross of Jesus were his mother, and his mother’s sister, Mary the wife of Clopas, and Mary Magdalene. When Jesus saw his mother, and the disciple whom he loved standing near, he said to his mother, “Woman, behold, your son!” Then he said to the disciple, “Behold, your mother!” And from that hour the disciple took her to his own home.
After this Jesus, knowing that all was now finished, said (to fulfil the scripture), “I thirst.” A bowl full of vinegar stood there; so they put a sponge full of the vinegar on hyssop and held it to his mouth. When Jesus had received the vinegar, he said, “It is finished”; and he bowed his head and gave up his spirit. (John 19:17-30)
Sinfully Scattered
The text in the Gospel According to Saint John is noted for its double meanings and symbolism. Using these favored literary devices, our reading points beyond the original horrid scene of our Lord’s crucifixion. The aim was to teach and guide us. Consequently the text we study here, written during the latter days of the first century and possibly into the second... pointed ahead to a new era. I emphasize to you that these words still echo forward into our own time.
Be warned! Many of us fall into the shallowness of only reading this scripture on the surface, afraid to wade deeper by the Spirit into the text. Christians often seem fearful that we may get too deep into holy waters… and thus could drown in misinterpretations. However, know that we are called to dare so in prayer.

First take note that the fulfillment of the Hebrew scripture was described as being accomplished by the soldiers. The example allows us to do that very thing! Gamble a bit on a sure thing and look upon scripture to see the fulfillment and meaning beyond that horrid, yet graceful day. We may rightly risk by the power of the Holy Spirit, to read and consider this scene deeply.... gleaning what our Lord would have us know.
For example, let us focus on one particular occurrence in the text… the disposition of our Lord’s garments. John wrote that the clothing items were initially distributed four ways… one for each soldier. Does it not occur to us that this number stands out? Why was the number spelled out... why was it important to John's writer to mention this fact? Does this number correlate with several items in scripture?
Without ungainly reach, consider first that four is the exact number of gospel witnesses in the New Testament. Happenstance? Maybe... but also... does it not remind the Church that there are four directional corners of the earth… as now signified even by our modern GPS compass services? Indeed!

Consequently, I believe that this four-way correlation should give us pause as we examine the text more closely. As another example, Jesus’ clothing once wrapped around his earthly body, surrounding him like the group of disciples which had sheltered him in their very homes. Those garments were also divided four ways! Was it then a prophetic sign that his Church would follow in the same way? Is not the Church thought to be the bearer of Christ. Are we not his clothing? Are we not called to be garments strewn across what was then believed to be the four corners of the earth by the breath of the Holy Spirit, supporting his message declaration in similar fashion to the palms strewn on the road before him on Palm Sunday.?

Baptismal Garments
Note that our gospel writer also placed the cloak of Christian inheritance upon us, as he further told us that the tunic Jesus wore could not be parted out. Remember! They cast dice for it! We note in this the desired singular, monolithic character of the Church, which would later cast dice to see who would replace Judas. Does the robe then represent for us the collective identity of the baptized people of God. I repeat... "The tunic could not be torn into parts!"
The world may try to rip the Church to shreds, and within the four walls schismatic powers often attempt to poke holes in the garment... these in order to justify making heretical pockets. Yet the cloak remains intact. We are reminded by the text then, that we who were baptized into the one, holy and apostolic Church are united by the power of God to be working in the Church through the Word and the Holy Spirit. We are therefore to collectively and rightly bear witness to our Lord’s deeds upon the cross. That is the message that we need to both hear and realize for this and every Good Friday observance. 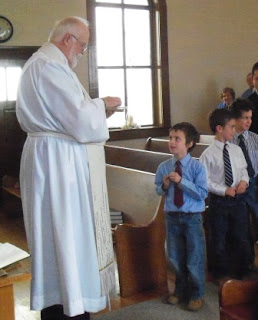 Indeed blessed ones, know this! Jesus, who is the Christ… washed the feet of his gathered disciples and was soon afterward arrested. Was this more than preparation for the holy meal? Was this preparation a cleansing for travel during the days ahead?

Subsequently, Jesus' garments were taken from him in worldly ignorance, but now symbolize for us both the scattering of the Church and the unity of its witness. This is a dualistic message that I consider subtly placed before us by John, available to us when we rightly approach the Word and the cross.  We can ask, therefore... “What is it that our Lord says to us from that cross?” His words were, and still are… “It is finished.” All that needed to be done for our salvation, God has done. And now, walking clothed, clean footed and fed in the seamless baptismal gown of the Church... we are called to witness concerning that great and wonderful deed. Thanks be to God.